Former high school football coach Joe Kennedy, who was fired for praying on the field, argues the article was looking to elicit a response from readers.

Joe Kennedy, the Washington state high school football coach who was fired for praying alone on the field after a game, spoke out after a tweet by Sports Illustrated accused him of “eroding democracy.”

Kennedy said he believes the publication was looking to elicit a response with the inflammatory framing of his case.

The Supreme Court is set to issue a ruling in Kennedy’s case over the issue of religious freedom. Critics warned that a coach praying publicly after a game could coerce or pressure players to join in the religious act.

The Sports Illustrated tweet stated that the Supreme Court will soon issue a warning and laid out the writer’s anticipated result: “a win for Kennedy and an erosion of a bedrock of American democracy.”

RON DESANTIS CALLS OUT DEMOCRATS, MEDIA OVER THREATS TO SCOTUS: ‘TOTALLY ANTITHETICAL TO RULE OF LAW’

Greg Bishop, the author of the article, explained that a ruling in Kennedy’s favor could further erode the separation of church and state in America.

Kennedy said on “Fox & Friends” Tuesday that he met with Bishop and praised his storytelling ability. He questioned whether the editors or others at the publication were responsible for the tweet’s language. Bishop’s article was headlined, “When Faith and Football Teamed Up Against American Democracy.”

First Liberty Institute special counsel Jeremy Dys said confidently that a coach praying alone on the field after a game is not a threat to democracy.

“I think we’re going to learn at the end of the month just how far the Constitution protects his rights,” Dys said. 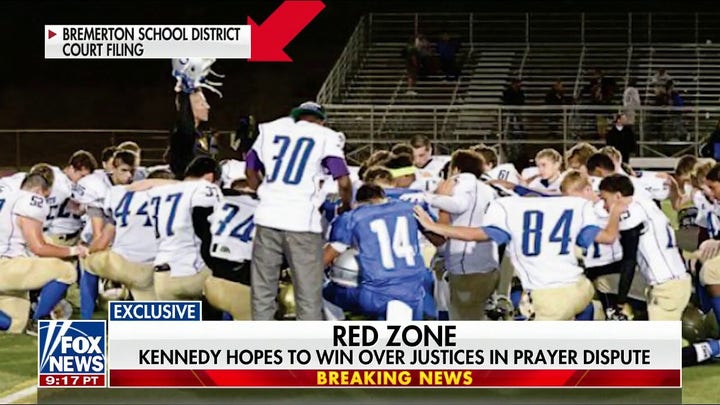 Dys pointed to the school district’s 2015 investigation into the case as support for his argument that Kennedy will emerge with a win.

“They concluded that there is indeed no evidence of any student being coerced to pray or otherwise during his time as a football coach,” Dys said. “And at the end of the day, I think that’s exactly what the justices understand actually happened here.”

Kennedy said he has waited every day for the final ruling.

“Keep your fingers crossed and heaven forbid if you said a prayer,” he said.