The mother of an Ivy League swimmer said Monday she’s outraged over the recent move by the University of Pennsylvania to nominate transgender athlete Lia Thomas for the NCAA “Woman of the year” award.

“[The message is] they’re not even worthy of dignity and comfort in their locker rooms. And this nomination is just the embodiment of that message. It’s really frustrating to understand where the current NCAA and Ivy League and especially Penn’s stance is on the value of women in modern society,” said Jones, a former All-American tennis player whose daughter competed against Thomas.

University of Pennsylvania transgender athlete Lia Thomas swims in a preliminary heat for the 500 meter freestyle at the NCAA Swimming and Diving Championships Thursday, March 17, 2022, at Georgia Tech in Atlanta. (AP Photo/John Bazemore)

The transgender athlete was nominated for the NCAA award, which recognizes female student-athletes, according to an announcement for the award.

Jones said college athletes spend countless hours training, which is “dismissed” when biological males can compete against them with unfair physical advantages. 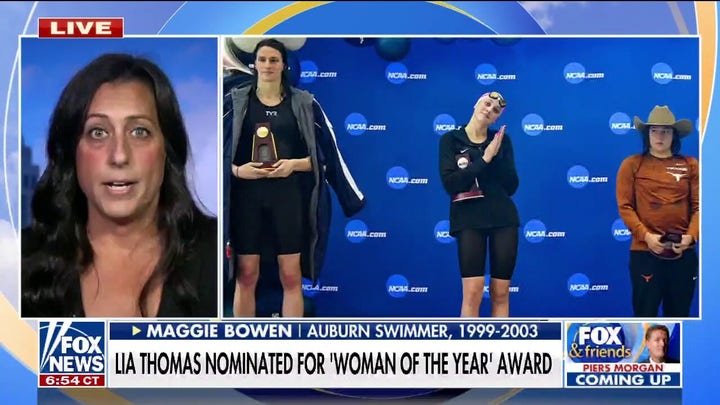 “That’s what all that effort, all those hours, all that hard work and the journey that was supposed to be so empowering and fulfilling has been reduced to something that people think is a sideshow. It’s really frustrating,” she told Todd Piro.

“There is a biological difference between men and women. And if we can’t agree that that foundational truth is a reality, then how can we protect our girls and women?”

Elizabeth Heckman is a digital production assistant with Fox News.