Trevor Reed, a retired Marine who was freed from Russia in April after his initial arrest in 2019, weighs in on the U.S.’s proposed prisoner swap to free WNBA star Brittney Griner and executive Paul Whelan.

Former U.S. Marine Trevor Reed, who spent three years in a Russian prison, called on the Biden administration to do more to help free the dozens of other Americans currently detained abroad.

Reed was arrested in 2019 for allegedly hitting a Russian police officer. He was found guilty in July 2020 and sentenced to nine years in prison. He was released in April as part of a prisoner swap.

The administration proposed another prisoner swap to negotiate the release of WNBA star Brittney Griner and executive Paul Whelan.

“There’s over 65 Americans who are wrongfully detained around the world,” Reed said on “America’s Newsroom” Monday. 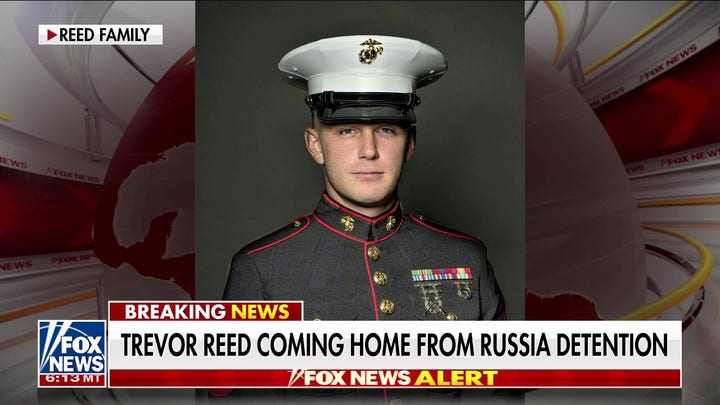 While Reed said he is grateful for the administration’s efforts to free Griner and Whelan, he hopes they continue working to free the dozens of other Americans as well.

Reed described the “terrible” conditions of the Russian prison to host Bill Hemmer, saying he was malnourished and returned to America weighing only 130 pounds due to the “extremely poor quality” of food.

“And the forced labor camp, I refused to work,” he said. “So I was being punished by being put in solitary confinement that consists of basically just a concrete room. I slept on the floor for most of my time there.”

WNBA star and two-time Olympic gold medalist Brittney Griner is escorted to a courtroom for a hearing, in Khimki just outside Moscow, Russia, Wednesday, July 27, 2022. (Evgenia Novozhenina/Pool Photo via AP)

Reed explained that he asked family members not to relay any information about a possible release while he was in prison.

“I didn’t want the Russian government to be able to take that from me. So to me, I wanted to kind of have this wall up and protect myself from any type of potential pain or disappointment,” he said.

“I believe in this case that it’s worth it,” Reed said, expressing support for the exchange.

“That trade is probably to the benefit of the United States more than it is to Russia.”