Olympian Kim Glass calls for change after attack in LA: ‘We just keep dropping the ball’

Olympian Kim Glass shares her recovery following a brutal attack in Los Angeles by a repeat offender and calls for justice, change in high-crime cities.

Just over a week after being attacked in broad daylight in downtown Los Angeles, Olympian Kim Glass is using her voice to advocate for change in criminal justice policies.

On “America’s Newsroom” Friday, Glass shared her recovery process while also advocating for justice for other victims of her attacker, a repeat offender.

Last week, Glass was attacked with a metal bolt while walking by a homeless camp by 51-year-old Semeon Tesfamariam. He was a repeat offender out on parole despite felony charges in 2018 and 2019.

Tesfamariam was charged with assault with a deadly weapon last Tuesday and faces up to 11 years in prison.

“I’m healing. My emotions change every day,” said Glass. “I’m always really grateful and happy that this didn’t turn out as bad as it could have been.”

Olympic silver medalist volleyball player Kim Glass gets emotional chatting with friends while taking care of a bruised eye outside a restaurant in Beverly Hills. (BACKGRID)

Amid rising crime rates In California cities, she argued the need for a crackdown on criminals, including keeping offenders off the streets.

“I think that we all deserve the opportunities of freedom, but not if you’re a terror to society,” Glass said. “History is repeating itself with this. He was let out on probation and he attacked someone else.”

Glass, a former Team USA volleyball player who won a silver medal on the 2008 Olympic team, said the suspect had already been arrested for attacks on women.

“So what does it take? Like, we just keep dropping the ball,” she told hosts Sandra Smith and Bill Hemmer, with her left eye and face still visibly bruised and swollen from the attack. 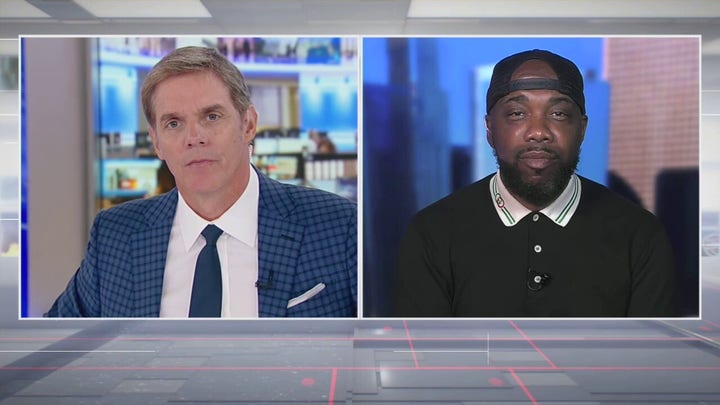 Glass echoed concerns about repeat offenders and criminals being let out on parole and staying on the streets.

“There’s been other victims around Los Angeles and it keeps on happening,” said Glass.

“Everyone’s paying attention to me because I’m an Olympian. But these…other victims haven’t been vindicated.”

Madeline Coggins is a Digital Production Assistant with Fox News.