Skip to content
Homepage / Uncategorized / Witness describes chasing down US Olympian's attacker: 'Somebody needs to do something' about LA crime
close
Video

Benson Parks, who filmed the attack on Olympian Kim Glass, describes taking down the attacker and says something needs to be done about the homeless and crime crises.

Benson Parks chased down a man who brutally attacked Olympian Kim Glass on the streets of Los Angeles. Parks said Wednesday he didn’t think before running after the attacker and holding him until police came.

The suspect, Semeon Tesfamariam, has since been charged with assault with a deadly weapon for allegedly attacking Glass with a metal bolt and causing serious injuries to her face.

Parks said he was eating lunch in his truck when he heard the Olympic volleyball player’s screams.

LOS ANGELES CRIME SPIKE: WILL ‘PROGRESSIVE’ PROSECUTING CAUSE AN INCREASE IN CRIME FOR OTHER US CITIES?

“I see blood everywhere,” Parks recounted after getting out of his truck and seeing Tesfamariam across the street.

“I just ran across the street and choke-hold him, dragged him back across to the street, and threw him to the ground and held him down until the police came,” he said on “America’s Newsroom” Wednesday.

Olympic silver medalist volleyball player Kim Glass gets emotional chatting with friends while taking care of a bruised eye outside a restaurant in Beverly Hills. (BACKGRID)

Tesfamariam was previously convicted of felony assault in 2018 and again in 2019. His latest attack against Glass was unprovoked, according to Los Angeles County District Attorney George Gascon.

“A lot of people say that he was mentally ill or whatever, but he didn’t resist me in that way,” Parks told host Bill Hemmer.

“I could see him maybe being under the influence of something. But as far as mentally ill, I won’t give him that because I’m now learning that this is his fourth or fifth time doing this to women in downtown.”

Parks said other women have reached out to him in the days following Glass’ attack saying they were also attacked by Tesfamariam. 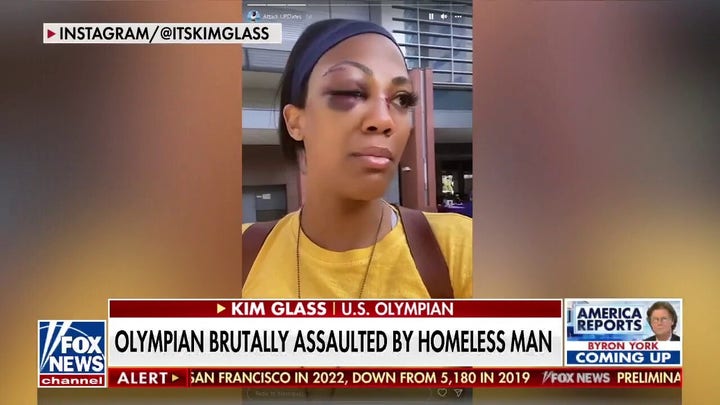 Liberal DA Gascon is faced with a possible recall election due to his policies that critics have described as soft-on-crime as the violent crime rate is up 8.2% in 2022, according to LAPD data.

Parks said he spoke to Glass Tuesday and that she’s doing alright. He called for action and warned the Los Angeles homeless and crime crises are already out of hand.

“Somebody needs to do something,” he said.