WNBA star Brittney Griner is pleading her case to President Biden, asking if the U.S. can intervene and liberate her from her long-standing Russian detainment amid fears that she may be imprisoned “forever.” In recent weeks, Griner’s wife Cherelle broke her silence as well, calling for the Biden White House to step up.

“It kills me every time that I write to her, and she’s asking ‘Have you met with him yet?’ And I have to say no,” she told “CBS Mornings” host Gayle King about her wife, who has been held in Russia after being arrested allegedly for possession of cannabis.

“I’m sure she’s like, ‘I’m going to write him and ask now because my family has tried to no avail, so I’m going to do it myself.'”

Brittney Griner of the Mercury celebrates during the WNBA Finals on Oct. 13, 2021, at the Footprint Center in Phoenix, Arizona. (Barry Gossage/NBAE via Getty Images)

“I still have not heard from him,” she lamented following an urgent spiel about calling government attention to her wife’s detainment.

Cherelle, who wed Griner in 2017, said she has been silent for a majority of her detainment but decided to make her voice heard after realizing her silence produced no progress.

BRITTNEY GRINER’S AGENT CALLS ON BIDEN, HARRIS TO ‘DO WHATEVER IT TAKES TO BRING’ WNBA STAR HOME FROM RUSSIA

“Everything about this is a calculation for me because I have to walk the fine line of harm versus help when it comes to my wife right now,” she said. “Initially, I was told we’re going to try to handle this behind scenes, so let’s not raise her value and stay quiet. You know, I did that, and, respectfully, we’re over 140 days in at this point and that does not work, so I will not be quiet anymore.”

A young Mercury fan holds up a sign during the Las Vegas Aces game, May 6, 2022, in Phoenix. (AP Photo/Darryl Webb)

The WNBA star, who received backlash for her opposition to playing the national anthem at basketball games, has a patriotic side, according to Cherelle, and she decided to write to Biden on the Fourth of July for that reason.

“She cherishes the Fourth of July. Her dad fought in the Vietnam War… B.G. loves that and so she cherishes this holiday, and she uses it as a day to honor his service and freedom, so I know that it’s killing her that she wasn’t able to do her annual fireworks show and put chairs on the lawn for all of us to sit down and really give him the respect due.” 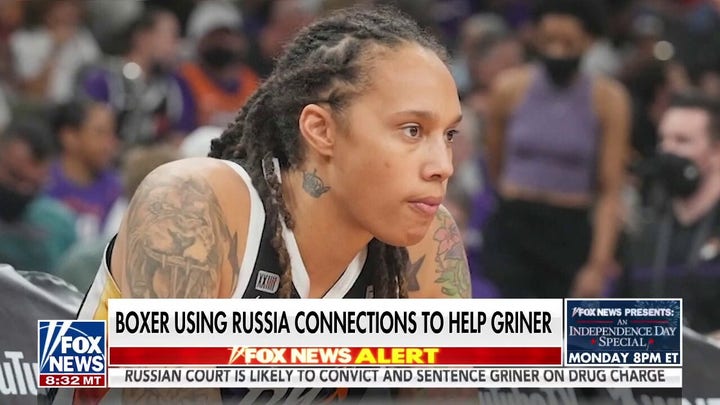 Cherelle continued stressing Griner’s appreciation for America, saying she has repeatedly stated that she would enlist in the military if she were not a basketball player.

The Russian Federal Customs Service charged Griner with large-scale transportation of drugs after arresting her at a Moscow airport in February, a charge that Cherelle says “blew [her] mind” and that she knew the allegations were false as soon as she heard them.

Taylor Penley is a production assistant with Fox News.